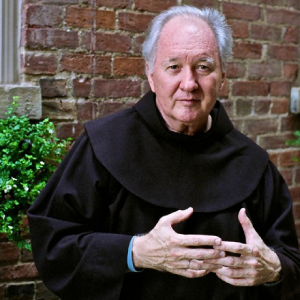 John’s early background in the fine arts led him into the field of graphic arts and design,
woodblock and silkscreen prints, sculpture and paintings. He designed various chapels and
offices, illustrated numerous books and published three periodicals. On his return to North
America, after 23 years in Europe, his artwork took a dramatic step with exploration into
the world of the unconscious. In painting retreats, John assists participants in using art as a
means of self-expression, healing and growth. His international justice work serves as
background for his exploration of the milieu and times of St. Francis of Assisi, and the
profound trauma that Francis experienced as a soldier who at 20 years of age was defeated
in hand-to-hand combat and imprisoned by the enemy for a year.
A member of the Franciscan Order of Friars Minor (OFM), Cincinnati Province of St. John the Baptist, John initially set out in 1972 to work in the area of graphic design and publishing. With a detour he began a pastoral and preaching ministry from 1974-1980 as co-pastor with Richard Rohr at the New Jerusalem Community in Cincinnati. In 1979-81 he studied the Spiritual Exercises of St. Ignatius Loyola with the Jesuits of Milford, Ohio.

In 1982 he was named coordinator of social justice, peace and environmental concerns for the friars of his province and published “Mustard Seed” (1983-1989), an international Franciscan social justice monthly periodical. From 1984-89 John served as the president of the North American OFM Justice and Peace Council, developing an immersion program for friars from Canada and the USA to visit communities in Central America. He was a member of the Boards of Directors for the Nevada Desert Experience, Franciscans Network (Mustard Seed) and Franciscans International.

In 1988 he was assigned to the General Offices of the Franciscan (OFM) Order in Rome as the international coordinator for the efforts of the friars in the areas of justice, peacemaking and care for creation. During his tenure in Rome (1988-1998) he traveled extensively and was deeply involved in Franciscan peace efforts in Colombia, Brazil, and Pakistan, and especially during the civil war in Croatia, Bosnia/Herzegovina.

In 1998, he moved from Rome to Geneva, Switzerland, as director of Franciscans International, a non-governmental organization (NGO) at the United Nations. For ten years he coordinated Franciscan work along with the Dominican Order to promote and protect human rights by bringing the testimony of people at the grassroots into the work discussions of the various UN Human Rights Committees and the Council on Human Rights in Geneva. In 2009 he established and coordinated the desk for Climate Change for Caritas Internationalis (Rome).

John is available for Spiritual Direction.